Contrary to Popular Opinion, America Already Has an “Extreme” Position on Abortion

Contrary to Popular Opinion, America Already Has an “Extreme” Position on Abortion

As the Republican National Convention kicked off a couple weeks ago in Florida, Pulitzer Prize winning journalist, Joel Brinkley, criticized the GOP platform on abortion, calling it the most restrictive abortion policy in the Western world. "The Republican Party," he says, "has placed itself in a position in which it could be totally alone in the world." Just over a week later, The Telegraph (UK) ran a story which makes it clear that America is already quite alone in the world when it comes to the extremity of its position on reproductive rights.

The article is headlined, "British women fly to US to choose sex of baby," and reports on the growing number of women from all over Europe who are flying to the United States for what is called pre-implantation genetic diagnosis (PGD). New York-based Dr Jeffrey Steinberg says he has performed PGD on 400 British women since opening operations a few years back. "Parents have come to us from nearly every nation on the planet," Dr Steinberg boasts, "seeking to balance their families or assure themselves that a pregnancy will result in only the gender outcome they desire." Why are women from all over the world having to come to the United States for such "services"? Because the United States does not restrict sex-selection implantation or sex-selection abortion.

In a series of exposés published in February, The Telegraph expressed outrage at the realization that sex-selection abortion was rampant and widespread in the UK, despite their being against the law. Journalist, Allison Pearson, who supports legal abortion, writes the following:

I grow ever more uneasy as I see abortion become not a regrettable, sad act of last resort, but just another form of contraception… Over the past 40 years, there has been a 3,700 per cent increase in abortions… This is not what the 1967 Abortion Act was intended for… So we really shouldn’t be a bit surprised if this particular slippery slope leads from guilt-free annual terminations – three for two, anybody? – to a “gender-balancing” service, which helps you plan the perfect family by vacuuming away infants of the wrong sex. There is a moral coarsening here that should concern us all… there is little doubt that when such gendercide really occurs, it largely takes place against baby girls. For such a third-world act to be happening in our own country is unconscionable. We should direct the full force of the law against the doctors and clinics who are abusing their power and permitting babies to be terminated in this country for no cause except their gender.

Faithful to the "self-evident" truths enshrined in the Declaration of Independence, we assert the sanctity of human life and affirm that the unborn child has a fundamental individual right to life which cannot be infringed. We support a human life amendment to the Constitution and endorse legislation to make clear that the Fourteenth Amendment's protections apply to unborn children. We oppose using public revenues to promote or perform abortion or fund organizations which perform or advocate it and will not fund or subsidize health care which includes abortion coverage. We support the appointment of judges who respect traditional family values and the sanctity of innocent human life.

By contrast, this is the 2012 Democratic Party platform on abortion:

The Democratic Party strongly and unequivocally supports Roe v. Wade and a woman's right to make decisions regarding her pregnancy, including a safe and legal abortion, regardless of ability to pay. We oppose any and all efforts to weaken or undermine that right. Abortion is an intensely personal decision between a woman, her family, her doctor, and her clergy; there is no place for politicians or government to get in the way. We also recognize that health care and education help reduce the number of unintended pregnancies and thereby also reduce the need for abortions.

As remarkably unrestricted as US abortion policy already is, the Democratic Party platform on abortion calls for it to be liberalized even further–as evidenced by the line, "regardless of ability to pay." In other words, women have a right to abortion, and women have a right for tax dollars to pay for their abortion. And the DNC follows it up with the tired and patently false assertion that abortion should be left to "a woman, her family, her doctor, and her clergy." If this were actually true, a woman would need the consent of said family, doctor, and clergy before she could get an abortion. But as it actually stands, even if the woman's husband, children, parents, siblings and in-laws all opposed the abortion, along with her doctor and every member of her pastoral staff, the woman could still get the abortion. The abortion decision is only left to her extended support network so long as they support having an abortion!

Thankfully, even those ideologically committed to "safe and legal" abortion are starting to notice the DNC's growing love affair with abortion, which included invitations to both the president of NARAL and the president of Planned Parenthood to speak at their convention this week. Pro-choice, Bloomberg columnist, Margaret Carlson, penned a Wednesday article titled, "How Democrats Lost Their Way on Abortion." She writes:

Why has the party removed the sentence “Abortion should be safe, legal, and rare” from its platform? It was in the 2004 document but not in 2008’s or this year’s. Can’t Democrats just throw a crumb to the many millions who are pro-choice but not pro-abortion?… Democrats have gone too far… [O]ver the years, Roe’s legal framework has been eroded by loopholes large enough for an eight-month-pregnant teenager to walk through… the health of the mother exception is vast, encompassing age, emotional, familial and state of mind factors broad enough to include virtually any woman in any circumstances… Medical science is galloping ahead of Roe. When the case was decided, we barely had sonograms and it was a miracle for a 22-week-old fetus to survive… Walk into any neonatal unit (today) and you’ll see newborns weighing 2 pounds; they’ll be playing basketball one day… Abortion won’t be a defining issue for Democrats this election, but the party’s more militant posture guarantees that bipartisanship is still a long way off. On this issue, we can’t get along. But it wouldn’t hurt to put the word “rare” back in the platform.

Tim Stanley wrote in a September 5 column for CNN that, because the Democratic Party's platform "contains no limit on access to abortion[,] the Democratic platform is now the more radical." Pundits can call the GOP platform on abortion "extreme" all they want. "Extreme" is a subjective and amoral distinction. The Democratic platform is no less extreme. It's just extreme in the opposite direction. And while Democrats have historically prided themselves for their extreme devotion to the marginalized and oppressed, their party's extreme devotion to abortion is now eliminating the most marginalized and oppressed–by the millions. In the context of abortion, Margaret Carlson is absolutely right. The President has lost his way. 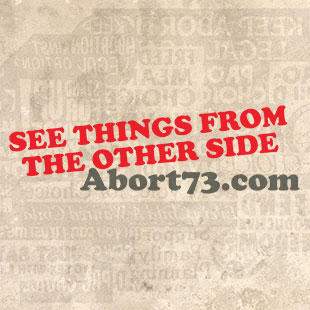