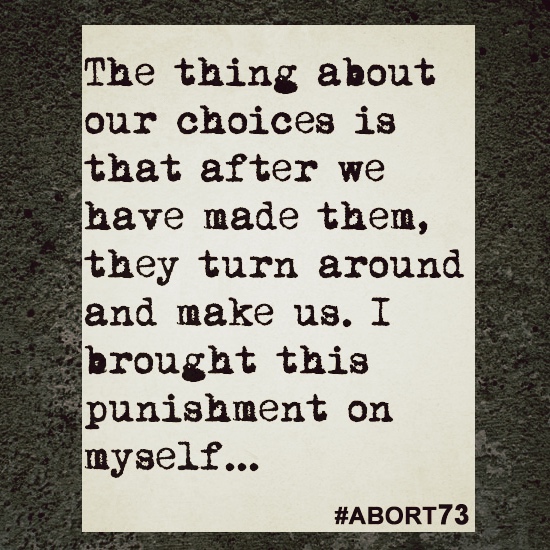 The thing about our choices is that after we have made them, they turn around and make us. I brought this punishment on myself...

I can still hear the nightmarish slurping echo from the suction aspirator machine in my dreams. I vividly recollect the day, twenty-three years ago, that I heard that dreadful appliance’s deafening hum. I awake with a powerful jolt, quivering, and in a cold sweat. Through my progressive promiscuity, I became pregnant at seventeen years old. I was naïve, frightened, distraught, and in panic mode.

I didn’t tell anyone I was pregnant. I didn’t tell my parents, girlfriends, or even the father of the child. My father had always told me that I would end up, “barefoot and pregnant,” and I would not allow him the satisfaction of telling me he was right. He will never know. I selfishly did not want him, or anyone else to contest my resolution to have an abortion as soon as possible, period. I never thought for one moment about keeping “it,” and I completely disconnected my head from my heart, convincing myself that abortion was an uncomplicated, legal procedure that would swiftly eliminate the “cluster of cells in my uterus.”

To my astonishment, I did not need parental consent for an abortion. However, permission would have been required to receive one aspirin from my high-school nurse. I suppose I was a Christian in name, but I did not truly believe in anything. I made the appointment and ambled into a “Planned Parenthood” abortion clinic. It was like entering a police station, down a narrow and sinister hallway that seemed endless, and ultimately ending up at a window paned with multiple sheets of bullet-proof glass. Midpoint was an undersized, circular opening. Not wanting to make eye contact with the young woman behind the thick panes, I whispered my name into the hollow. She sifted through some loose papers, then pressed a button that buzzed me inside. Crumpled over, I sauntered through the substantially heavy door, laden with numerous locks. This place is more protected than a bank. I knew this abortion would be yet another failure in my pathetic, incessant string of mistakes. I can turn back now, before I enter this door. I didn’t turn back. I felt selfishly indifferent but still sensed a numb chill inside those clinic walls. The clinic staff was stern and structured, rushing me through the process. Everything about the procedure was completely void of life, and the lies were manifold. They did not care what my rationale was or why I wanted an abortion. They simply validated my “proper” decision to end the pregnancy. I was not given any counseling or information about other options, like keeping the baby or giving the baby up for adoption. I knew nothing about fetal development. I did not know that my baby had a strong heart-beat, eyes, ears, fingerprints, toes, a firm grip, and had probably already experienced a few annoying cases of the hiccups. As I was hurriedly shuffled from room to room, it was never suggested that I keep my baby in any way.

First, pay two hundred and fifty dollars, cash only. I couldn’t afford anesthesia. Fill out these forms, go take a urine test, sit, and wait. As minutes ticked by like hours, no one talked. The few who did quickly silenced themselves after hearing the awkwardness of their own voices. One woman casually leaned over to me and whispered that this was her fourth abortion, and it was “no big deal.” I didn’t respond, feeling too sick and fuzzy-headed. How can she carry that on her conscience? No one else in the room could even look at each other. One by one they called our names. I was finally summoned and corralled into an exam room for an ultrasound.  A woman squirted chilly jelly on my belly, and began to stare at my active baby. I swiftly grabbed the ultrasound monitor and looked at it. I do not know why I did this; I truly never expected to see anything. The nurse was totally stunned and dismayed, fearfully looking towards another woman who was obviously a supervisor. I didn’t know it then, but that assistant knew that women who see their baby’s heartbeat are 95% less likely to abort. “The patient should not see the sonogram machine,” is plainly written in “Planned Parenthood” camaraderie, or employee manuals.

Reptilian smooth, the “boss” immediately took over. She carried herself like a confident specialist as she figuratively pointed out my organs, placenta, everything but the baby. She smiled while indicating each meaningless reference, I nodded my head, but was straining to see a grey, shadowy “beat” moving on the screen. What the heck is that? My breath caught and my chest suddenly felt tight. I felt flushed and had to regain control of myself. No-way. I ultimately tried to ask, “Is that the heartbe-” but I stopped. That could not be the baby’s heartbeat, there was no baby yet!

“Oh, of course dear,” she answered in an overly sugary voice, pretending to laugh. She confirmed that I was about nine week’s gestation, which was, “merely a couple of teaspoons of tissue.” I uneasily shook my head, maybe I was seeing my own pulse or some throbbing innards. Seemingly satisfied with herself, she chaperoned me out of that room. I was still discerning the diminutive “beating” I had just witnessed, but, because of denial and unconscionable self-centeredness, I did not stop.

Hours later, I was in the undersized, muted room where I would have the abortion. The peculiar doctor leisurely walked in, hastily introduced himself, and instantaneously began. I kept lying to myself over and over; “it will all be over soon.” The suction machine was flipped on, that ghastly, piercing drone that continues to wake me today. The nurses “selling abortion” told me the abortion would feel no worse than, “bad menstrual cramps;” liars! The unbearable pain took me by surprise and I involuntarily started gagging. I writhed in agony with each pitiless tug. It felt like my bowel was being ruthlessly dragged through my vagina. I pulled in a deep breath, but when the stagnant air hit my nostrils, so did the nasty stench, which I soon realized was the smell of blood. My blood, the baby’s blood. Oh my God!

I tried to sit up, but the doctor rigidly pressed one spidery hand on my upper stomach, and one on the straw-sized catheter that savagely plunged in and out of me with unfathomable thrusts. He did not even know my name, and called me “hon.” In my obvious alarm, he said, “It’s OK, hon, almost finished.” That disgusted me, and I tasted vomit. Stop! Please Stop! The room started to spin as excruciating cramps pierced through me. In minutes that felt like hours, it was finished, but triggered lifelong problems.  The aloof abortionist and one nurse swiftly gathered their bloodied supplies, along with a glass “beaker” filled with blood, tissue, and my dismembered baby. Neither said another word to me, they just walked out, making little effort to conceal the gruesome remains.  The deadly suction aspirator machine was on wheels for simple and efficient transfer. The expressionless nurse whirled it around and scurried out the door for the next abortion. Time was money, and that was palpable here. I lay helpless on that metal gurney, immobile with anguish for what seemed like an eternity. I was stunned in sullen comprehension, my head was throbbing. There is no proper way to do the wrong thing. I just paid a man to kill my baby!

Eventually, I was moved to a crammed and soiled “recovery room.” It was overflowing with young women, all with sorrow-brimmed eyes and in immense pain. Before I could even finish scanning the room, the queasiness hit. I folded my hands over my mouth and dashed for the bathroom, but I wasn’t alone. I found myself leaning over one filthy toilet with four other women, all squirming and twisting around to find a tiny opening to vomit into. When I glanced up from the porcelain rim, the woman that asserted abortion was “no big deal,” was there. After she had thrown up, she leaned back on the wall, pale and sweating profusely. She looked as if she might faint. I wanted to shake her, ask her why she had so flippantly lied, but that desire swiftly faded in my own nausea induced vertigo. We wordlessly laid there, like beaten dogs stricken into submission. An irritable nurse popped her chewing gum as she demanded that we all go sit down. Everyone lingered in immobilizing pain. So she began literally pulling us by the necklines of our shirts from the toilet’s musty edge.  A brown paper bag filled with condoms and birth control pills was shoved into my hands, and I was quite literally pushed out the back door. The front waiting room was reserved for waiting girls who had money yet to be spent. I guess common sense isn’t so common. I limped away, as sheer emptiness settled into the very foundation of my being. I was not told that I would be unable to look at my own disgraceful reflection in a mirror, or that my confidence and self-respect would be gone immediately.

The thing about our choices is that after we have made them, they turn around and make us. I brought this punishment on myself. Abortion didn’t “help” me as I exercised my “right to choose” at seventeen years old. I hurt myself even more, and I knew it instantly. Although relief was the only emotion that I did not feel, I buried my dirty secret for over ten years, telling myself I would never have an abortion again. It didn’t happen. I tried to lie to myself to quell the anguish and guilt, but I couldn’t bury the truth forever. Those who forget history are often doomed to repeat it, but I would never have this break in my morality ever again. For anyone who thinks abortion helps women, there is a village missing its idiot.

I felt lower than pond scum, but I certainly didn't change for the better. In about a year, my caustic lifestyle left me pregnant again, but this time, everything would be different. I refused to make the same lapse in personal ethics again. I was keeping my baby, no matter what. My parents wanted me to abort their grandchild. What they didn’t know or understand was that I had already taken the life of one of their grandchildren, and I couldn’t do it again. 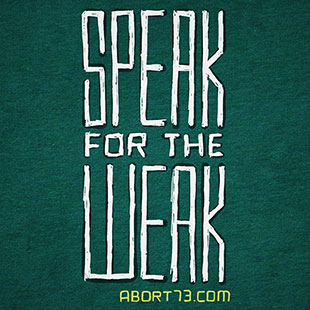