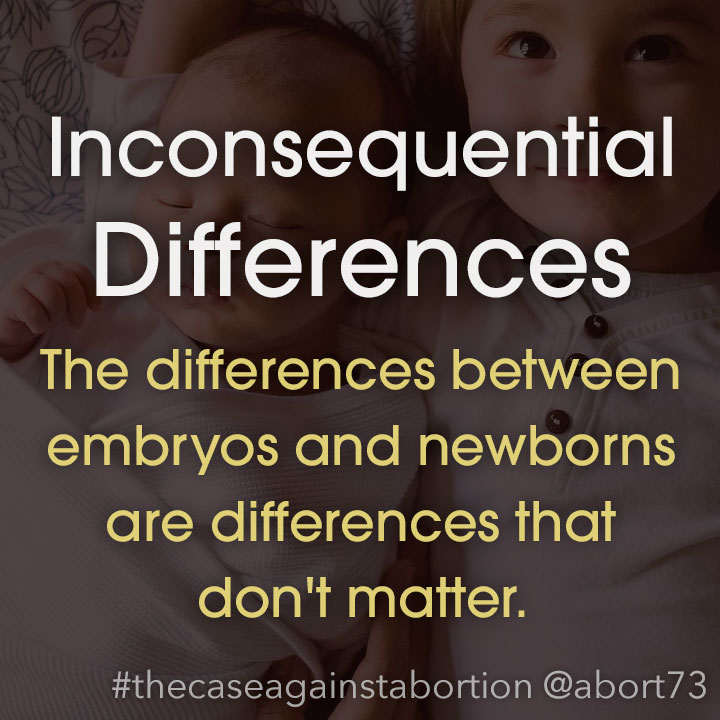 The lives of newborn children are protected by law. The lives of embryos and fetuses are not, at least when the context is abortion. If you asked the average abortion-supporter why this is—why it is legal to kill a human being before birth but not after birth—they would likely point you to some of the differences that exist between humans in the womb and humans out of the womb. Stephen Schwarz, in his book, The Moral Question of Abortion, notes that there are four basic ways that an embryo or fetus differs from a newborn baby. He coined the acronym SLED to help people remember and categorize these differences. They are: Size, Level of Development, Environment, and Degree of Dependency. By looking at each of these differences in context, it is easy to see that none of them are sufficient to justify abortion, because each of them are equally applicable to people outside the womb.

It is quite true that embryos and fetuses are less developed than a newborn (unless, of course, that newborn was born prematurely). But this too is a distinction which has no moral significance. It is a difference of degree, not of kind. Physical and/or intellectual development has nothing to do with determining personhood outside the womb. It is equally insignificant for determining personhood inside the womb. Children are generally less developed than adults. People with developmental disabilities may be less developed than some children, and those with extraordinary mental capacity are no more human than those with lesser IQs. It is humanity, not brain capacity or arm strength that determines personhood.

The third difference between an embryo or fetus and a newborn baby is their place of residence. Embryos and fetuses live inside the womb, and newborn babies live outside the womb. Just like the distinctions that have gone before, this, too, is an inconsequential difference. Where someone lives has nothing to do with the essence of who that someone is. Moving from the bedroom to the kitchen, or from indoors to outdoors, or from your car to the classroom doesn't affect your personhood in the least. Personhood stems from inclusion in the human species, not from the location in which you reside. For the entire duration of pregnancy, the tiny unborn child is a human being all its own. It is dependent upon its mother for many life-sustaining functions, but it is certainly not part of its mothers body. Any attempt to disqualify unborn children from receiving their due rights of personhood because they live in a womb rather than in a room is dishonest and unjust. Location doesn't affect the personhood of those outside the womb, and it shouldn't affect the personhood of those inside the womb.

The issue of dependency may well be the one abortion supporters turn to most in their attempt to justify abortion. "Since a fetus can't survive on its own," they argue, "it has no inherent right to life." What's the problem with this argument? In the broadest sense, it could be applied to all of us. There isn't a person alive who is radically independent from the universe we live in. We all need food, water, rest, and oxygen. We're all vulnerable to a million different bodily breakdowns. Are those who must rely on kidney machines, pace-makers or insulin shots for their survival less deserving of basic human rights than anyone else? Some of us may be less dependent than others, but if it is dependence that strips away a person's right to protection under the law, then we would all be in trouble. Embryos and fetuses who must rely on an umbilical cord in the womb are just as human as those who must rely on a feeding tube outside the womb.

Perhaps the biggest absurdity about this whole attack on dependence is the fact that dependency should merit more protection under the law, not less! After all, the younger and more dependent a child is, the more care and compassion we have for them. The U.S. Department of Justice expresses it well when they say, "Homicides are always tragic, but our sympathies are heightened when the victim is a young child or adolescent. Thus, the deaths of juveniles raise understandable public concerns."1 The nation is far more outraged at violence directed towards children than at violence directed towards other adults. The reason is simple. Children are more helpless, and less capable of defending themselves. And the younger the child is, the truer this becomes. How we ever got to the place of using dependency against children rather than for children is a tragedy of staggering proportions.

A person, as defined by the dictionary, is nothing more or less than a living human.2 Anyone who tries to narrow this general definition of personhood does so in an attempt to eliminate a certain group of people who is either getting in their way or has something they want. Creating self-defined definitions of personhood, which are uniquely crafted to eliminate certain individuals from protection under the law, has long been the method of choice for implementing all manner of genocidal atrocities. The differences that exist between a human being before birth and a human being after birth are differences that don't matter.

Even if there are no ethical differences between a fetus and a newborn, abortion is an isolated matter of individual choice. It has nothing to do with the desired elimination of people groups. You cannot compare it to historic acts of genocide.

To learn our response, continue to the next page: Systematic Dehumanization 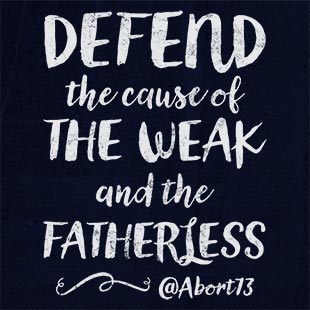