A new human being comes into existence during the process of fertilization. 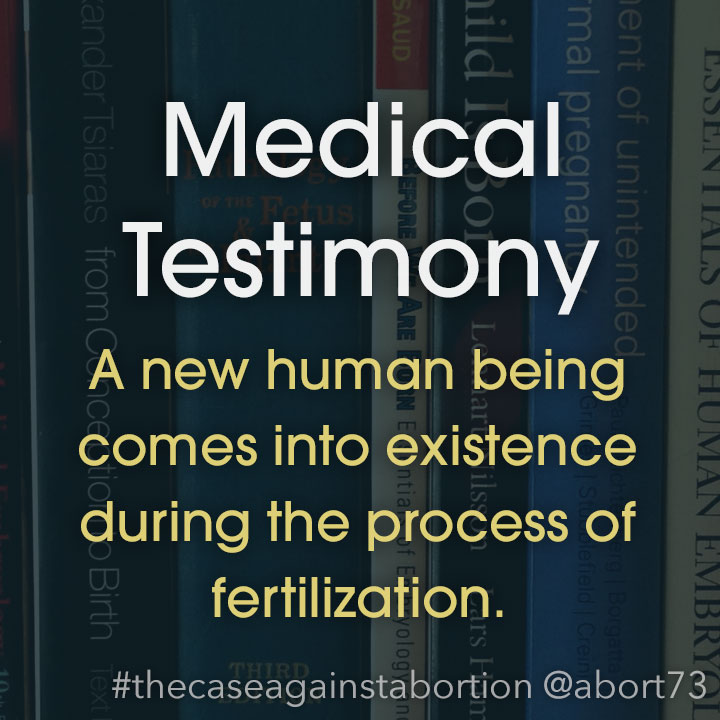 It is false to claim that no one knows when life begins and dishonest to argue that abortion does not kill a human being.

Every new life begins at conception. This is an irrefutable fact of biology. It is true for animals and true for humans. When considered alongside the law of biogenesis—that every species reproduces after its own kind—we can draw only one conclusion in regard to abortion. No matter what the circumstances of conception, no matter how far along in the pregnancy, abortion always ends the life of an individual human being. Every honest abortion advocate concedes this simple fact.

Faye Wattleton, the longest reigning president of the largest abortion business in the United States—Planned Parenthood—argued as far back as 1997 that everyone already knows that abortion kills. She proclaims the following in an interview with Ms. Magazine:

I think we have deluded ourselves into believing that people don't know that abortion is killing. So any pretense that abortion is not killing is a signal of our ambivalence, a signal that we cannot say yes, it kills a fetus.1

On the other side of the pond, Ann Furedi, the chief executive of the largest independent abortion business in the UK, said this in a 2008 debate:

We can accept that the embryo is a living thing in the fact that it has a beating heart, that it has its own genetic system within it. It’s clearly human in the sense that it’s not a gerbil, and we can recognize that it is human life.2

Naomi Wolf, a prominent feminist author and abortion supporter, makes a similar concession when she writes:

Clinging to a rhetoric about abortion in which there is no life and no death, we entangle our beliefs in a series of self-delusions, fibs and evasions. And we risk becoming precisely what our critics charge us with being: callous, selfish and casually destructive men and women who share a cheapened view of human life... we need to contextualize the fight to defend abortion rights within a moral framework that admits that the death of a fetus is a real death.3

David Boonin, in his book, A Defense of Abortion, makes this startling admission:

In the top drawer of my desk, I keep [a picture of my son]. This picture was taken on September 7, 1993, 24 weeks before he was born. The sonogram image is murky, but it reveals clear enough a small head tilted back slightly, and an arm raised up and bent, with the hand pointing back toward the face and the thumb extended out toward the mouth. There is no doubt in my mind that this picture, too, shows [my son] at a very early stage in his physical development. And there is no question that the position I defend in this book entails that it would have been morally permissible to end his life at this point.4

It is possible to give ‘human being’ a precise meaning. We can use it as equivalent to ‘member of the species Homo sapiens’. Whether a being is a member of a given species is something that can be determined scientifically, by an examination of the nature of the chromosomes in the cells of living organisms. In this sense there is no doubt that from the first moments of its existence an embryo conceived from human sperm and eggs is a human being.5

Bernard Nathanson co-founded one of the most influential abortion advocacy groups in the world (NARAL) and once served as medical director for the largest abortion clinic in America. In 1974, he wrote an article for the New England Journal of Medicine in which he states, "There is no longer serious doubt in my mind that human life exists within the womb from the very onset of pregnancy..."6 Some years later, he would reiterate:

There is simply no doubt that even the early embryo is a human being. All its genetic coding and all its features are indisputably human. As to being, there is no doubt that it exists, is alive, is self-directed, and is not the the same being as the mother—and is therefore a unified whole.7

Margaret Sanger, the birth control pioneer who founded Planned Parenthood, publicly condemned abortion. She called it "dangerous and vicious."8 In attempting to distance contraception from abortion, she wrote in 1932 that "no new life begins unless there is conception."9 In other words, Sanger knew that a new life begins at conception—and she knew that abortion entails "the killing of babies."10

Despite overwhelming consensus with regard to life's beginning, Roe vs. Wade, the landmark 1973 verdict which legalized abortion in the U.S. is actually built on the claim that there's no way to say for certain whether or not abortion kills because no one can say for certain when life begins. Justice Harry Blackmun, who authored the majority opinion wrote:

The judiciary, at this point in the development of man's knowledge, is not in a position to... resolve the difficult question of when life begins... since those trained in the respective disciplines of medicine, philosophy, and theology are unable to arrive at any consensus.11

Justice Blackmun's assertion is a ridiculous one, at least as it applies to the field of medicine. Dr. Nathanson had this to say about the ruling:

Of course, I was pleased with Justice Harry Blackmun's abortion decisions, which were an unbelievably sweeping triumph for our cause, far broader than our 1970 victory in New York or the advances since then. I was pleased with Blackmun's conclusions, that is. I could not plumb the ethical or medical reasoning that had produced the conclusions. Our final victory had been propped up on a misreading of obstetrics, gynecology, and embryology, and that's a dangerous way to win.12

Dr. Nathanson would eventually abandon his support for elective abortion and note that "the basics [of prenatal development] were well-known to human embryology at the time the U.S. Supreme Court issued its 1973 rulings, even though the rulings made no use of them."13 In biological terms, life's beginning is a settled fact. Individual human life begins at fertilization, and there are all sorts of authoritative, public resources to prove this. Consider the evidence below:

"Human development begins at fertilization, approximately 14 days after the onset of the last menstrual period… when a sperm fuses with an oocyte to form a single cell, the zygote. This highly specialized, totipotent cell marks the beginning of each of us as a unique individual."

"Human development begins at fertilization when an oocyte (ovum) from a female is fertilized by a sperm (spermatozoon) from a male. "

"Although life is a continuous process, fertilization (which, incidentally, is not a 'moment') is a critical landmark because, under ordinary circumstances, a new genetically distinct human organism is formed when the chromosomes of the male and female pronuclei blend in the oocyte."

"Human embryos begin development following the fusion of definitive male and female gametes during fertilization... This moment of zygote formation may be taken as the beginning or zero time point of embryonic development."

"The time of fertilization represents the starting point in the life history, or ontogeny, of the individual."

"It is the penetration of the ovum by a spermatozoan and resultant mingling of the nuclear material each brings to the union that constitues the culmination of the process of fertilization and marks the initiation of the life of a new individual."

"The term conception refers to the union of the male and female pronuclear elements of procreation from which a new living being develops."

"The zygote thus formed represents the beginning of a new life."

"Every time a sperm cell and ovum unite a new being is created which is alive and will continue to live unless its death is brought about by some specific condition."

"Every baby begins life within the tiny globe of the mother's egg... It is beautifully translucent and fragile and it encompasses the vital links in which life is carried from one generation to the next. Within this tiny sphere great events take place. When one of the father's sperm cells, like the ones gathered here around the egg, succeeds in penetrating the egg and becomes united with it, a new life can begin."

"The two cells gradually and gracefully become one. This is the moment of conception, when an individual's unique set of DNA is created, a human signature that never existed before and will never be repeated."

"I have learned from my earliest medical education that human life begins at the time of conception."

"After fertilization has taken place a new human being has come into being. [It] is no longer a matter of taste or opinion...it is plain experimental evidence. Each individual has a very neat beginning, at conception."

"By all the criteria of modern molecular biology, life is present from the moment of conception."

"The beginning of a single human life is from a biological point of view a simple and straightforward matter – the beginning is conception."

Physicians, biologists, and other scientists agree that conception marks the beginning of the life of a human being - a being that is alive and is a member of the human species. There is overwhelming agreement on this point in countless medical, biological, and scientific writings.14

The American Medical Association (AMA) declared as far back as 1857 (referenced in the Roe. vs. Wade opinion) that "the independent and actual existence of the child before birth, as a living being” is a matter of objective science. They deplored the “popular ignorance...that the foetus is not alive till after the period of quickening.”

Why have all the teaching texts and so many medical experts come to this same conclusion? Because there are simple ways to measure whether something is alive and whether something is human. If Faye Wattleton is correct and everyone already knows that abortion kills a human being, they have come to that knowledge in spite of the information circulated by Planned Parenthood and the rest of the abortion-rights community. The abortion section of the Planned Parenthood website explains abortion this way:

"Abortion is a safe and legal way for women to end pregnancy."15

Planned Parenthood either believes that the killing component of abortion is so obvious that it doesn't bear mentioning, or they are simply reinforcing a common and convenient misconception. Biologically speaking, abortion has nothing to do with potential human life. Every abortion at every point in the pregnancy ends the life of a genetically-distinct human being.

This page was last updated on September 30, 2019. To cite this page in a research paper, visit: "Citing Abort73 as a Source."

Even if an embryo is alive at fertilization, it's still just a clump of microscopic cells. Until the heart is beating or the brain is functioning, women should be free to have an abortion.

To learn our response, continue to the next page: Prenatal Development 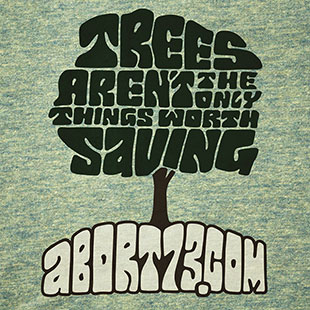