An overview of federal abortion rulings in the United States. 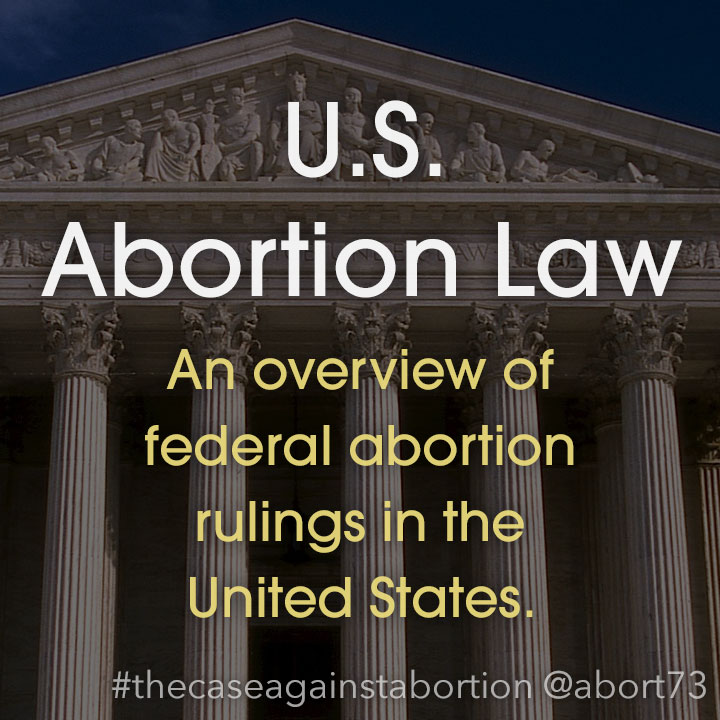 The single decision of seven non-elected justices has defined federal abortion policy in the United States since 1973. Largely regarded as the most radical decision ever issued by the Supreme Court, it was explicitly defended on the basis of ignorance—under the false claim that "no one knows when life begins."

The history of abortion in the United States is far more complicated than most people imagine. It has been an issue of varying contention for more than 200 years. Nevertheless, abortion has never enjoyed such universal protection under the law as it has since 1973. As it stands today, American women have the legal right to obtain an abortion in all 50 states, through all nine months of pregnancy, for virtually any reason at all. This has been true since the Supreme Court declared that autonomous abortion rights are built into the Constitution, and that legal barriers to abortion are unconstitutional. This ruling was arrived at on the premise that the 9th and 14th Amendments, according to legal precedent established during the 1960's, guarantees a woman's "right to privacy"—a right that extends even to abortion.

The opportunity to make such a sweeping declaration came via two cases which both presented constitutional challenges to state criminal abortion laws. One case came from Texas and the other from Georgia. The Texas case, Roe v. Wade involved a pregnant, single woman, "Roe," who was suing the Dallas County district attorney, Henry Wade, to prevent him from enforcing Texas' abortion prohibition. Since her life was not threatened by her pregnancy, she had no legal basis for aborting in Texas. Prohibitive abortion laws had existed in Texas with very little change since 1854, but had always included an exception to save the life of the mother. The Georgia case, Doe v. Bolton, involved a married woman who was also denied an abortion for not meeting the necessary state requirements. Georgia law allowed for abortion if the life or health of the mother was threatened, if the baby was seriously deformed, or if the pregnancy was a result of rape. A three-judge District Court ruled that Roe did have basis to sue, and declared Texas abortion law void for being "vague" and "overbroad."1 The District Court ruling in the Doe case was split. It ruled that there were some unnecessary bureaucratic burdens that might hinder someone from receiving a due abortion, but they still held that the State had a right to restrict abortion according to the princliples already in place. Both decisions were appealed, both decisions ended up before the Supreme Court, and both verdicts were handed down on the same day: January 22, 1973.

Roe ruled (7-2) that though states did have an interest in protecting fetal life, such interest was not "compelling" until the fetus was viable—placing viability at the start of the third trimester.2 Thus, all state abortion laws that forbade abortion during the first six months of pregnancy were thereby invalidated. Third trimester abortions were declared to be legal only if the pregnancy threatened the life or health of the mother. The Doe verdict, however, defined "health of the mother" in such broad terms, that any prohibitions to 3rd-trimester abortions were essentially eliminated.3 According to Justice Harry Blackmun's majority opinion, a woman's health includes her "physical, emotional, psychological, (and) familial" well-being, and should include considerations about the woman's age.4 "All these factors may relate to health," Blackmun argued, so as to give "the attending physician the room he needs to make his best medical judgment."5 In other words, if a woman is sufficiently upset about her 3rd-trimester pregnancy, her doctor has the necessary legal basis to abort.

In 1976, abortion again made its way to the Supreme Court, in Planned Parenthood v. Danforth, where all state laws requiring spousal or parental consent were thrown out. Thornburg v. American College of Obstetricians and Gynecologists, a 1986 case that was split 5-4, struck down all manner of abortion restrictions including the requirement to inform women about abortion alternatives, the requirement to educate women about prenatal development, the requirement to inform women of the potential risks of abortion, the requirement to keep records of abortion, and the requirement that 3rd-trimester abortions be performed in such a way as to spare the life of the viable child. All these were argued to be violations of a woman's right to privacy. In 1989, however, in Webster v. Reproductive Health Services, Roe was dealt a serious blow. The court, in a 5-4 opinion, let stand a Missouri statute stating that human life begins at conception, and declared that the state does have a "compelling" interest in fetal life throughout pregnancy.6 The trimester/viability framework of Roe was basically thrown out, but Justice O'Connor, despite arguing for essentially the same thing in prior case law, withheld her endorsement from the portion of the Webster opinion which would have actually overturned Roe. As such, federal abortion laws remained largely unchanged, but the rationale for such laws began to crumble. Many states took this opportunity to put more restrictive state measures in place. In 1990, two cases (Hodgson v. Minnesota and Ohio v. Akron Center for Reproductive Health) ruled that states requiring parental consent before a minor could have an abortion must allow for a judicial bypass.

In 1992, Planned Parenthood v. Casey reached the Supreme Court. The right to legal abortion was upheld in the Casey decision, but a 24-hour waiting period was put in place, as well as an informed-consent requirement, a parental-consent provision, and a record-keeping mandate. States were also given more discretion as to when viability begins. Casey was decided 5-4, but the opinion of the Court was essentially divided into three factions. Justices Blackmun and Stevens did not endorse the new burdens placed on legal abortion, but were willing to concede to gain the support of Justices O'Connor, Kennedy and Souter, who believed that Casey was a happy medium between giving states more control while still upholding the basic conclusions of Roe. Justices Rehnquist, White, Scalia and Thomas dissented altogether, believing Roe had no Constitutional basis to begin with and thereby felt no obligation to uphold it. Today, the language of Casey, more than Roe, serves as the dominant precedent in abortion law.

The last abortion-related case to reach the Supreme Court was Gonzales v. Carhart, which was decided in 2007 by a 5-4 vote. It upheld a 2003 congressional ban on the abortion procedure known as intact dilation and evacuation—also known as dilation and extraction (D&X) or partial-birth abortion. The Partial-Birth Abortion Ban Act of 2003 came in response to the Supreme Court's ruling in Stenberg v. Carhart (2000) that Nebraska's partial-birth abortion ban violated the Federal Constitution as interpreted by Roe and Casey. Late-term abortionist, LeRoy Carhart, brought the suit against Nebraska Attorney General, Don Stenburg. The verdict was decided 5-4 on the basis that the Nebraska law did not include an exception for preserving the "health" of the mother—though it did include an exception if D&X was deemed necessary to save the life of the mother. The Court rejected Nebraska's contention that "safe alternatives" to partial-birth abortion made the health exception unnecessary. Three years later, Congress essentially reversed the Court by concluding that there was "a moral, medical, and ethical consensus that partial-birth abortion is a gruesome and inhumane procedure that is never medically necessary and should be prohibited."7 The federal Partial-Birth Abortion Ban Act also defined the procedure more specifically than the Nebraska statute had done previously. When LeRoy Carhart challenged the constitutionality of the ruling, the Eighth Circuit of Appeals ruled in his favor, causing U.S. Attorney General, Alberto Gonzales, to appeal the ruling to the Supreme Court. The 2007 verdict upheld the ban, ruling that it was not overly vague nor that the lack of a health exception imposed an undue burden on a woman's right to abortion. Though the arguments had changed very little between 2000 and 2007, the make up of the Court had. The retirement of Sandra Day O'Connor—who opposed the ban in 2000—and William Rehnquist, along with the appointment of John Roberts and Samuel Alito, ultimately reversed the earlier outcome.

Despite, the legal wranglings which are documented in the cases above, abortion law has remained virtually unchanged since Roe was first decided. The single decision of seven non-elected justices continues to define federal abortion policy decades after it first invalidated 200 years of state law. John T. Noonan, Senior Circuit Judge on the Ninth Circuit Court of Appeals, wrote the following of Roe's unprecedented ruling:

On January 22, 1973, the Supreme Court of the United States deciding Roe v. Wade and Doe v. Bolton announced that a new personal liberty existed in the Constitution—the liberty of a woman to procure the termination of her pregnancy at any time in its course… Some of the [repealed abortion legislation] was old, going back to the mid-nineteenth century, some was recent… (But) old or new, compromise or complete protection from conception, passed by nineteenth-century males or confirmed by popular vote of both sexes, maintained by apathy or reaffirmed in vigorous democratic battle, none of the existing legislation on abortion conformed to the Court’s criteria. By this basic fact alone, Roe v. Wade and Doe v. Bolton may stand as the most radical decisions ever issued by the Supreme Court.8

Edward Lazarus, a former clerk of the man who wrote the Roe opinion, echoes this same theme. Despite his affection for Justice Blackmun and his unwavering support for legal abortion, he writes:

[Roe v. Wade] has little connection to the Constitutional right it purportedly interpreted… [W]hen Democratic senators oppose a judicial appointment because of the nominee’s opposition to Roe, they not only endorse but make a litmus test out of one of the most intellectually suspect constitutional decisions of the modern era. They practically require that a judicial nominee sign on to logic that is, at best, questionable, and at worst, disingenuous and results-oriented.9

At its core, Roe v. Wade is a decision that is explicitly defended on the basis of ignorance. Justice Blackmun stated in the majority opinion that, "at this point in the development of man's knowledge... [we cannot] resolve the difficult question of when life begins."10 He further states that "if this suggestion of (fetal) personhood is established, the [case in support of legal abortion] collapses, for the fetus' right to life would then be guaranteed specifically by the (14th) Amendment."11 While the claim, we just don't know when life begins, was demonstrably false in 1973, it is even more nonsensical today. We do know when life begins. We are "at the point in the development of man's knowledge" where we can "resolve [this] difficult question." Nevertheless, the law remains the same. Abortion has become entrenched in American life, and the institution which was hoisted upon us without public debate has become a force to be reckoned with. John T. Noonan argues that, thanks to Roe, "human life has less protection in the United States today than at any time since the inception of the country [and] less protection... than in any country of the Western world."12 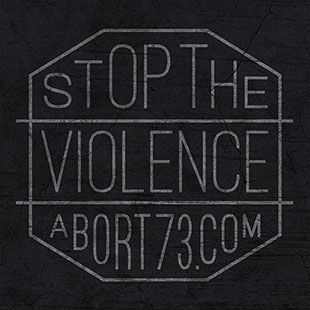