Abort73.com > The Case Against Abortion > The Role of Law

The Role of Law

It is reasonable and necessary for society to outlaw certain "choices." 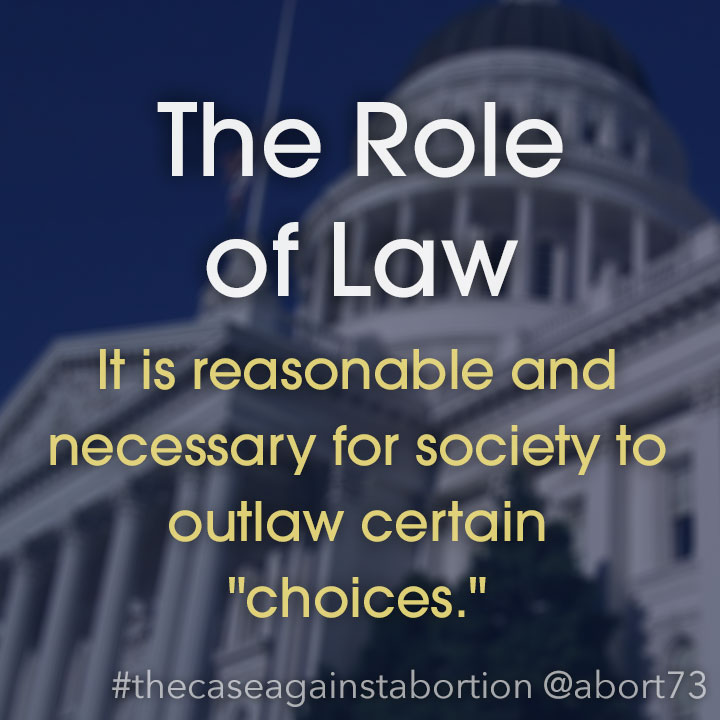 The only way people can successfully live together in community is to give up a measure of personal freedom. Personal choices that infringe on the life or livelihood of another human being must be legislated against.

The fundamental role of every government is to provide security for its citizens and to maintain public order. This cannot be done without legislating against certain choices. Even in free countries, citizens are not free to choose in any absolute sense. Some choices are lawful and some are not, which is why it is impossible to justify abortion by simply arguing that women should be "free to choose."

This, of course, has not stopped people from building their defense of abortion on the abstract defense of choice. You'll hear things like, "This is a free country... You can't legislate morality... My body, my choice!" In fact, many abortion-rights advocates will openly admit that abortion is "bad," only to turn around and argue that women must be free to make their own decisions, even if they're bad ones. On the surface that might sound noble. You're giving people a choice. You're letting them decide what's right for themselves, even giving them the freedom to fall.

The problem is, there is a big difference between a "bad" decision and a "criminal" decision. Getting sun burned is a bad decision. Burning your neighbors house down is a criminal decision. Refusing to study for a big test is bad. Refusing to stop when there is a pedestrian in the street is criminal. The law generally leaves people the legal freedom to make bad choices, but the law must do all it can to prohibit criminal choices.

So how do we decide what "bad" choices should be left to the discretion of the individual and what "bad" choices should be regulated by law? It's actually quite simple. If you look to the scenarios above, it's not hard to find the common denominator. Whenever bad choices inflict injury or harm on others, they become criminal choices. Drinking too much alcohol is bad. Driving drunk is criminal. This is why citizens are generally free to smoke in their home or car, but not free to smoke in all sorts of public places. Inflicting harm upon yourself is one thing. Inflicting harm upon someone else is quite another.

As it relates to abortion, the heart of the issue has nothing to do with choice. It has everything to do with what is being chosen. Therefore, when people insist on being called "pro-choice" instead of "pro-abortion," they're not being honest. Why? Because there are countless other issues for which abortion supporters are decidedly not pro-choice. Laws against rape, murder, theft, and assault are all "anti-choice," and yet no one criticizes these prohibitions for taking away the freedom to choose. When someone says they're "pro-choice," what they mean is that they support the right to choose abortion. That's the only thing on the table. Nobody is debating the right to parent the child or place the child for adoption. We're all agreed on those. Abortion is the single point of contention. So why not just say "pro-abortion"? Are they ashamed to even be associated with the word? Gay-marriage advocates don't seem to have a problem admitting they're "Pro-gay marriage."

By all appearances, abortion-advocates are attempting to distance themselves from the actual act of abortion, by arguing that they don't support abortion, they only support a women's legal right to choose abortion. But does that change anything? Is there a moral distinction between supporting abortion and supporting the right to abortion?

If abortion is a morally-neutral choice, like getting your hair cut or having a tooth pulled, then obviously women should be free to choose it. But if abortion is a not a morally-neutral choice, if it is more akin to cutting off someone's arm or pulling their head off (which abortion often does), then it must be stringently opposed by law! And don't forget that in 99% of all abortions, the woman having the abortion chose to have sexual intercourse. Therefore, it could just as easily be argued that these women already made their choice when they chose to engage in behavior that often leads to pregnancy. Abortion does not keep a woman from being pregnant. It simply ends the pregnancy of an already-pregnant woman by killing the embryo or fetus living within her.

The abortion industry has long known that abortion is almost impossible to defend in itself. There is simply no getting around the fact that it kills a living, genetically-distinct human being. Defending abortion on the basis of choice has proved a far more profitable strategy for them. But it only works so long as people are under-informed as to what abortion actually does to innocent human beings. When it's an abstract "bad," people can live with it. Abortion, to them, is a "necessary evil." But when abortion is accurately understood, it ceases to be "bad," it becomes "barbaric." And if it's bad enough to make its most ardent defenders leery of wearing its label, shouldn't that tell us something about the procedure itself?

The only way people can successfully live together in community is to give up a measure of personal freedom. Personal choices that infringe on the life or livelihood of another human being must be legislated against. Nobody argues that a man should be free to choose when the context is sexual assault. What a fool he would be to try and justify rape by saying, "My body, my choice." Society seems perfectly content to "force their morality" on would-be rapists.

In a perfect world, laws would be unnecessary. We would all love our neighbor and regulate our behavior accordingly, but we don't live in that world. Martin Luther King, Jr. once said, "It may be true that the law cannot make a man love me, but it can keep him from lynching me, and I think that's pretty  important." Nothing short of anarchy can guarantee the perfect freedom of choice, and so anyone who makes "choice" the basis of their defense for legal abortion is either ignorant or dishonest.

This page was last updated on November 26, 2018. To cite this page in a research paper, visit: "Citing Abort73 as a Source."

To prohibit a woman from having an abortion is to place the value of an embryo or fetus above that of the woman herself.

To learn our response, continue to the next page: Competing Rights 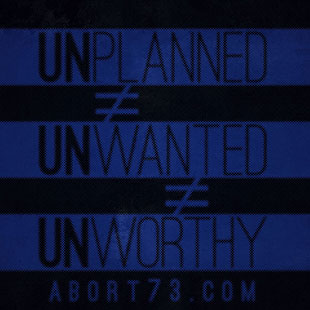