Abort73.com > Bringing an End to Abortion > How Will We Care for the “Extra” Children?

How Will We Care for the “Extra” Children?

If abortion were outlawed, what would the social ramifications be? 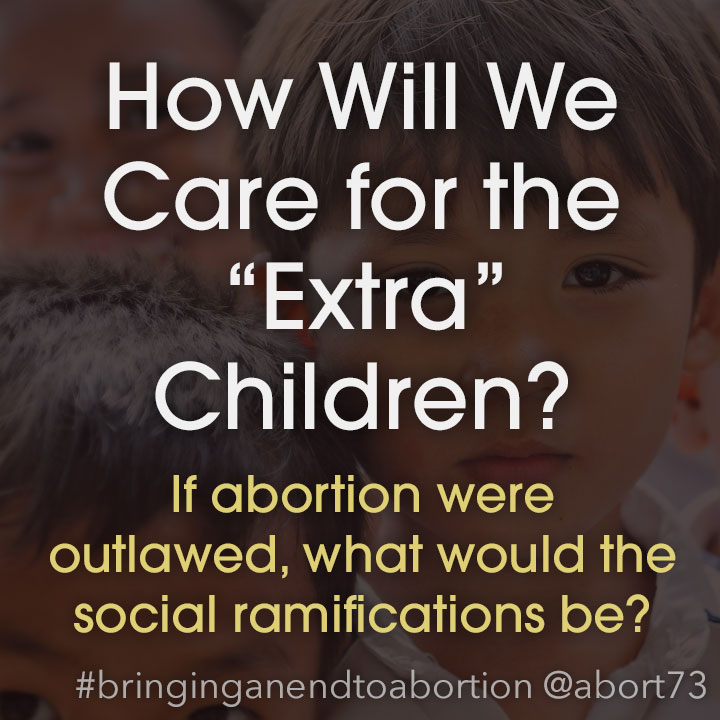 Though a significant cultural reordering would need to take place in a post-abortion society, there is no reason to believe that the social costs of abolishing abortion are insurmountable. Where there's a will, there's a way.

C.S. Lewis once observed that, "when a thing has to be attempted, one must never think about possibility or impossibility."1 We express the same sentiment with the age-old adage, necessity is the mother of invention. When something must be done, it's no good arguing why it can't be done.

One of the clearest expressions of this sentiment in the context of public policy comes from the 1772 Somersett verdict that outlawed slavery in England. Lord Mansfield declared that, "we feel the force of the inconveniences and consequences that will follow the decision [to abolish slavery]. Yet all of us are so clearly of one opinion upon the only question before us, that we think we ought to give judgment."2 He went on to declare that, "the state of slavery is of such a nature, that it is incapable of now being introduced by Courts of Justice upon mere reasoning or inferences from any principles, natural or political; it must take its rise from positive law."3 In other words, he could find no reasoned, principled justification for slavery. Its only defense was that it had positive law on its side—which he rightly understood to be no defense at all.

Lord Mansfield recognized that the abolition of slavery was sure to create significant inconveniences and consequences, but "in a case so odious as the condition of slaves,"4 that was the price that had to be paid. In the context of abortion, the U.S. Supreme Court has essentially come to the opposite conclusion. Nowhere has that been more evident than in the 1992 verdict for Planned Parenthood vs Casey. In a 5-4 ruling that narrowly upheld the constitutionality of Roe vs. Wade, we read that the "the principles of institutional integrity, and the rule of stare decisis require that Roe's essential holding be retained."5 In other words, since abortion had already been established as positive law, the Supreme Court's "institutional integrity" prevented it from re-examining the ethics of abortion. The verdict goes on to say:

The Roe rule's limitation on state power could not be repudiated without serious inequity to people who, for two decades of economic and social developments, have organized intimate relationships and made choices that define their views of themselves and their places in society, in reliance on the availability of abortion in the event that contraception should fail.6

Because people had spent the last 20 years "organizing" their sex lives on the assumption that abortion would always be legal and available, the social cost of abolishing abortion would be too high—or so the thinking went. The fact that this argument was made at all (and continues to be made today) is a strong indication that the ethical merits of abortion are dubious at best. The precedent of positive law and the social cost of abolition are not the pillars to build an ethical case upon. We've seen them crumble before. They did not justify the continued legal protection of slavery or segregation, and they do not justify the continued legal protection of abortion.

When the injustice of slavery was recognized, the "impossibility" of removing it from a culture dependent on its existence became morally irrelevant. The difficulty of accommodating millions of displaced slaves has no bearing on the justice of slavery, and the difficulty of caring for millions of children who would have otherwise been aborted has no bearing on the justice of abortion. Appealing to the social cost of abolishing abortion does not justify the act of abortion itself. It is only when that is recognized that we can fairly and reasonably consider the practical difficulties that must be overcome in a post-abortion world.

At the outset, we should remember that for the first 200 years of U.S. history, abortion was illegal. We've lived without abortion before. We can live without it again. Abortion is just one of three potential responses to unplanned pregnancy. The other two, adoption and parenthood, will remain perfectly viable solutions in the post-Roe era. The problem, of course, is that both adoption and parenthood require the mother to carry her child to term. There's simply no getting around the fact that abortion is a far more convenient option for women who don't want a child and don't want to be pregnant. Carrying a child for nine months (and then giving birth) is no small thing. According to most modern feminists (and to the Supreme Court ruling quoted above), women cannot have social and economic equality unless they can "control their reproductive lives." In other words, without the right to forcibly end a pregnancy, women cannot compete with men in the workplace or in society at large.

This seems a fairly low view of feminism, one for which the highest ambition is to essentially become a man. More to the point, such thinking misses the fact that there are non-abortive ways to ensure against pregnancy. Abstinence is one. Tubal ligation is another. The government does not force women to get pregnant and have children, but it does prohibit them from killing those children once they're born. Why should it be any different before the children are born? The real question is not whether abortion is convenient for women (and men). Clearly it is. The real question is whether or not abortion kills an innocent human being. If it does, then the convenience question is immaterial. Once it is recognized that abortion, at every stage of pregnancy, kills a genetically-distinct, rapidly developing human being, it can no longer be regarded as an ethically viable choice. Adoption must take its place, especially for women not materially or emotionally capable of parenting a child.

If adoption is to take abortion's place, the next question is whether or not it can realistically do so. The National Council for Adoption (NCFA) points out that "there are many couples hoping to adopt for every one adoptable infant."7 Their studies show that one-third of all women, aged 18-44, have considered adopting,8 and their coverage of the dramatic rise in international adoptions9 is further evidence that the demand to adopt is well ahead of the number of infants available to be adopted. But since there are close to one million abortions performed each year in the United States, perhaps you wonder whether the pool of waiting, adoptive parents would be exhausted in a few short years. Probably not.

The NCFA also points out that roughly 98% of the unmarried women who give birth decide to parent their baby. Only 2% place for adoption.10 If you apply that percentage to the number of pregnancies currently being aborted each year, the abolition of abortion would require the adoption of approximately 20,000 additional babies each year. In 2002, there were 130,269 domestic adoptions in the United States.11 Add 20,000 to that number and you get 150,269 adoptions, which is still well below the 175,000 domestic adoptions that took place in 1970.12 From 1970 to 1986, annual domestic adoptions decreased from 175,000 to 104,088.13 It's not hard to guess why. Nineteen seventy was also the year that New York became the first state in the country to offer unrestricted abortion during the first 24 weeks of pregnancy. By 1973, the Supreme Court had forced every other state in the union to follow suit.

A second point to consider is this. If abortion were not an option, if women had to carry their children to full term and fathers couldn't bail themselves out of child support by paying for an abortion, couples would simply have to be more vigilant about not getting pregnant. The number of unplanned pregnancies would almost certainly go down. As it stands now, abortion is a safety net—an opportunity to be far more sexually careless than people would otherwise be. No matter how careful people claim to be, abortion lurks in their back pocket as a sort of get out of jail free card. As long as it's there, it's a whole lot easier to be irresponsible. After all, if you get pregnant, you can always have an abortion! For many, removing abortion from the equation would be a remarkable deterrent to unplanned pregnancy.

Having said all this, it's almost certain that some abortion advocates will still maintain that society simply can't afford any more people, particularly ones from low-income, high-risk families. To that claim it should be pointed out that there are more than enough resources to go around. Each year, America spends $10 billion on pornography,14 $43 billion on pets,15 $74 billion on soft drinks,16 $81 billion on cigarettes,17 and $101 billion on beer.18 We seem to have plenty of disposable income. It's really a question of priorities, and the elimination of abortion may well force us to be less of a selfish and self-absorbed society and more of a "love your neighbor as yourself" society.

So long as abortion is an option, many women will use it.  When it's taken away, better options will by necessity take its place.  Though we can't foresee the future, we can reasonably speculate why the social costs of abolishing abortion are not insurmountable. In fact, many of the necessary adjustments would be solidly beneficial.  As NCFA president and CEO, Thomas Atwood, points out in his foreword to the Adoption Factbook:

Adoption has a profoundly positive impact on our people and country… Our whole society benefits from [the] much better social, economic, and behavioral outcomes… Birthparents who are not ready to parent move forward with their lives and have the assurance that their children have stable, loving, and permanent families. Adoptive parents know the joys of parenting and the satisfaction of doing the right thing for children in need. Through transracial and international adoption, love transcends racial and national boundaries, and promotes cultural diversity and tolerance. Through adoption, families thrive and compassion abounds.19

Adoption cannot remove the myriad social difficulties of being pregnant for nine months, but it is certainly a more compassionate and holistic solution to the problem of unplanned pregnancy, and an extremely practical way to care for all manner of "extra" children.

This page was last updated on February 25, 2019. To cite this page in a research paper, visit: "Citing Abort73 as a Source." 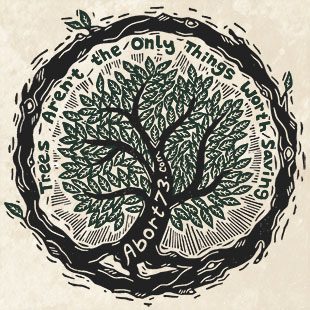