This morning, I stumbled upon an ASTOUNDING report from the American Medical Association (AMA), one which specifically addresses the topic of abortion. YOU NEED TO READ THE FOLLOWING EXCERPT (their assessment of where abortion providers fit into the broader medical community):

[These are] men who cling to a noble profession only to dishonor it; men who seek not to save, but to destroy; men known not only to the profession, but to the public as abortionists.. These modern Herods, like their prototype, have a summary mode of dealing with their victims. They perform the triple office of Legislative, Judiciary, and Executive, and, to crown the tragedy, they become the executioners. They seem impatient for the sacrifice.. those innocent and helpless victims are not permitted ever to breathe that vital air which God in His providence has destined for their use in common with the rest of the human family. Their resting-place is rudely invaded, and that which would grow and ripen into manhood is cut off from existence by the hand of an educated assassin. Mark the monster as he approaches his work!... Does any compunction assail his corrupt soul, as he gazes on the field of his labors? Does he measure the extent of the foul deed he is about to commit? Or does he not fear that the uplifted hand of an avenging God will suddenly fall on his guilty head? No; Judas-like, he solaces himself with the prospect of thirty pieces of silver, and this forms the climax of his aspirations!

But, as is found in many other cases of murder, there is no extenuating circumstance here that can change or modify the character of his guilt. As in ordinary cases of murder, there is no anger to prompt him to the deed, no wrongs to be avenged, no jealousies to be appeased. These he cannot point to as extenuating circumstances, and it matters not at what stage of development his victim may have arrived .. it matters not how small or how apparently insignificant it may be .. it is a murder, a foul, unprovoked murder; and its blood, like the blood of Abel, will cry from earth to Heaven for vengeance.

We have no foreign enemy to contend with, but we have a domestic enemy, and that enemy is in our midst; it surrounds us; yes, we have an unprincipled, an insidious, an unmitigated foe to deal with, an enemy to the human family, as dark and as malignant as the spirit that sent it, and it now becomes us to do our part faithfully towards God in this matter, to crush the monster, and to place the profession right before the public. For it is at this late date.. a doubtful question whether or not the profession of medicine, with all its boasted intelligence, with all the aids and appliances which science and art can bestow .. it is doubtful, with such a disgusting caudal appendage as the abortionist attached to it, whether that profession is an advantage or a disadvantage, whether it is a blessing or a curse, to the human family... The abortionists are more destructive to human life than ten [foreign] armies.

1871. That was the date of the AMA report. How things change... and don't change. Almost 140 years later, abortion remains, but the AMA's opposition to it has totally vanished. Here's their official position today:

The Principles of Medical Ethics of the AMA do not prohibit a physician from performing an abortion in accordance with good medical practice and under circumstances that do not violate the law. (III, IV)

What happened?! How did the AMA go from issuing what is probably the most fiery, anti-abortion statement I've ever read to supporting any and all forms of "legal" abortion? Did new scientific evidence demonstrate that human embryos and fetuses are not actually alive (something the AMA unequivically stated in 1871)? No, as William Brennan notes, in his book Medical Holocaust (where I was introduced to the AMA report), "The whole issue of when human life begins and whether life in the womb is really human even early in gestation had been scientifically answered by the mid 1850s." All science has done since, is show us more and more clearly that these are living human beings, at every stage of development. The only change has been a moral one. God is no longer a part AMA thinking and human life no longer has any intrinsic value. Those are steps backwards, not forwards. Still, while doctors have long known that abortion kills a living human being, the populace is not so well informed. A couple days ago, I got the following email:

You people are sick. You use your anti-abortion propaganda to mislead women who are already having a difficult time. They are not human beings, they are TISSUE. Embryos, not babies. I hope you rot in hell for putting yourselves above others who are merely making an informed medical decision.

Clearly, anyone who thinks abortion is just about "tissue" is not making an "informed medical decision". For that reason, we will continue to do all we can to eliminate the massive amount of abortion ignorance that exists across the country, all the while praying that people will have their eyes opened to more than just the science of the matter...

For more on the history of abortion in the U.S., click here 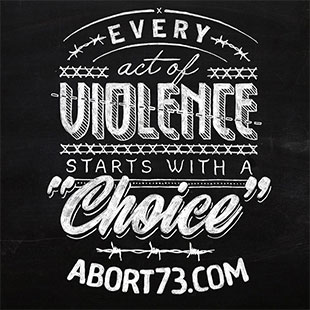